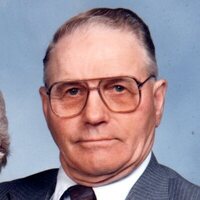 Wyman was born on January 21, 1920 at Sioux City, Iowa, the son of Merl and Ella Card. He grew up in the Egan and Trent areas of South Dakota. As a young man, he helped on the farm.

Wyman married Erma Nelson on May 31, 1941 in Pipestone, Minnesota. They began farming near Trent and then Wyman was drafted into the Army in December of 1942. He was discharged in December of 1945 and returned to farming for a few years.  Wyman then started his own gravel hauling business which he ran for a few years and then went to work at the Quaker Oats Elevator in Trent.

While he lived and worked in Trent, Wyman was member of the fire department and Trent Baptist Church. He also drove school bus and played in the basketball and softball league. He worked at the elevator for 18 years and then moved to Beresford where he took a similar job at the local elevator for a few years. Wyman then delivered livestock for the Sioux City Motor Express company. He moved to Sioux Falls in 1968 and after a few years he went to work for Speedway Trucking which has taken over the Sioux City Motor Express company. Wyman drove truck for them and later worked as their dispatcher at the stockyards.

Erma passed away on May 15, 2003. Wyman eventually moved to Brandon and lived there until his health caused him to become a resident at Southridge Care Center in Sioux Falls. Wyman was 100 years old when he passed away on November 12, 2020.

To order memorial trees or send flowers to the family in memory of Wyman Card, Sr., please visit our flower store.