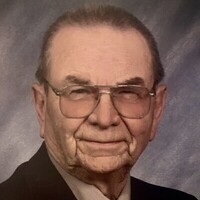 Wilburn Havery Hage was born July 1, 1920 to Peter and Emma (Possin) Hage in Bandon Township, in Renville County just outside Fairfax, Minnesota. Growing up he worked on many farmsteads & also did some logging in northern Minnesota.

In 1941 after Pearl Harbor was bombed, he enlisted in the Army. After serving in Newfoundland & Europe, he didn’t get home until the fall of 1945.

On June 16, 1946 he married Bernice Hogan in Minneapolis, Minnesota. They moved to Sioux Falls, SD. He worked with his brother building bridges. He was employed with Roy F. Drakes for 26 years, before he went into business for himself, called Wilbur & Associates, in Baltic, SD.

After retirement he continued to make pail chairs for fishing and stakes for construction. Also, made all kind of items out of wood. He loved wood working and was most happy when he could cut his own wood to burn.

He loved to hunt and fish and spend time in his garden. His favorite place to vacation was the Black Hills of South Dakota or anywhere there was a place to fish.

He always had a joke or a story to tell. He just had a way of telling them that mesmerizing.

Just before reaching 100, he wrote a book, called Wilburn Hage a hundred years of stories, which includes his life growing up during the Dirty Thirties and serving in World War II. Also, a special speech he gave at Augustana College in 2018.

To order memorial trees or send flowers to the family in memory of Wilburn Hage, please visit our flower store.