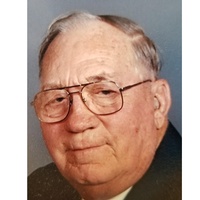 Wilbert was born on November 29, 1929 in Union County, South Dakota, the son of David and Jeanette (Adams) Finn. Wilbert moved with his family in 1940 to a farm near Rowena S.D.

In 1948, he went to work at Praether Motors and was a member of the Air National Guard.
After several months of active duty, he became a full time aircraft mechanic in the Air National Guard in 1953. Wilbert married Juella Erickson of Hendricks, Minnesota on June 22, 1957 at Bethlehem Lutheran Church near Astoria, South Dakota. The couple made their home in Sioux Falls. Wilbert retired from the Air Guard in 1985. After his retirement, he and Juella spent the winters in central Florida.

He was a dedicated husband and father. Wilbert was an active member in Scouting, Gra-Y, Indian Guides, and many other activities involving his sons. He was always ready to lend a willing, helping hand to anyone who needed assistance with a variety of tasks.

Wilbert was a member of East Side Lutheran Church. He moved from Sioux Falls to Buffalo, MN in 2013. Wilbert died on Feb. 9th, 2018 at 88 years of age, at Park View Care Center in Buffalo, Minnesota.

Wilbert is survived by two sons, Mark of St Cloud, MN, Chris (Patricia) Maple Lake, MN; two grandchildren, Alexander of Overland Park, KS and Jacqueline of St. Cloud, MN;
a brother, David Finn. He is preceeded in death by his parents, David and Jeanette Finn, and his wife, Juella.

Private interment will be held at Hills of Rest Cemetery, Sioux Falls, at a later date. Memorials may be sent to: 5566 33rd ST NW, Maple Lake, MN.
To order memorial trees or send flowers to the family in memory of Wilbert Finn, please visit our flower store.