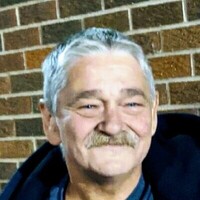 On June 6th, 2021 Tim Dean passed away peacefully at his home surrounded by family at the age of 62.

Tim was born on March 14th, 1959 in Sioux Falls, SD to Eugene and Cecilia (Anderson) Dean. He was the second youngest of seven children and was raised in Sioux Falls. He graduated from Washington High School in 1978. After graduation, he became a member of the 185th Fighter Wing in the Air National Guard in Sergeant Bluff, IA.

In 1981, his first daughter, Jamie, was born. That same year, Tim attended STI in Sioux Falls for Small Engine Repair. In 1987, he married his wife, Vicki (Tuttle) Dean, and together they had his second daughter, Chelsea in 1988.

For most of his life, Tim worked as a maintenance worker and handy man. In his youth and adult life he spent lots of time in Devils Lake ND. He was very proud of his ties to the Spirit Lake Tribe. He enjoyed his time he spent with the family up at Brant Lake on the pontoon boat, fishing and playing Norwegian poker at family gatherings.

Tim was a beautiful soul who touched a lot of people with his sense of humor, compassion and sharp wit. He could fix just about anything and had the patience to teach anyone willing to get their hands dirty. He enjoyed building things, working with his hands, and camping with his grand kids. With the change to his health, he was able to make one last trip up to Devils Lake with his granddaughter, Lexy. That trip helped him come to peace with the hand he was dealt.

Tim was a wonderful husband, father, grandfather, brother and friend to many and will be missed. We can rest assure that he is looking down from the heavens surrounded by family and probably a deck of cards. We Love you Grampy.

Tim is proceeded in death by his parents, Eugene and Cecilia; his siblings, Frank, Dave and Rose.

He is survived by his wife Vicki; two daughters, Jamie and Chelsea; son in law, Dana; grand kids, Lexy, Andre, Kenna, Ava and Easton; two brothers, Gene and Steve; and a sister Lyn; and many nieces and nephews.

To order memorial trees or send flowers to the family in memory of Timothy Dean, please visit our flower store.