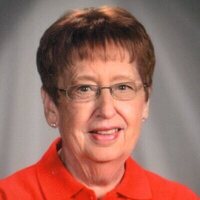 Theresa Katherine Schmidt, 83, of Sioux Falls, S.D. passed away on Thursday, September 2nd. The family is not planning to hold services at this time.

She was born to parents Frank and Theresa Thury, on June 28th, 1938 in Parkston, SD. Theresa worked as an Education Assistant for 30+ years at Axtell Park Middle School, from which she received an award for all of her hard work and commitment to education.

Theresa’s hobbies included bingo, cross stitching and music. Barry Manilow was one of her favorite artists. She attended several of his concerts.

On September 12th, 1959, Theresa married James Schmidt in Parkston, SD, he was the love of her life for their 61 years together. Together they raised three children; Tom Schmidt, Tim Schmidt and Kelly Schall.

To order memorial trees or send flowers to the family in memory of Theresa Schmidt, please visit our flower store.