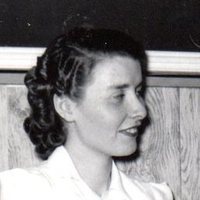 Shirley Switzenberg was born on July 6, 1931 at Parker, South Dakota, the daughter of Prescot and Johanna (Sweeting) Moter. She graduated from Gary High School and attended cosmetology school in Watertown.

She married Edward Switzenberg on October 5, 1952. Their marriage was blessed with five children. They lived in Watertown and then moved to Athol in 1964. In 1975, they moved to Mellette.  When Shirley was 27 years old, she became blind following an operation and at this time had four children under the age of 6. She took courses at the State School for the Blind to over-come her disability. Shirley was a caregiver and fostered several handicapped adults for over 15 years. Shirley and Ed shared 23 years of marriage before Ed passed away on February 15, 1975.

Shirley’s  life was devoted to her family. She took every opportunity to gather her children and grandchildren around her.

Shirley is preceded in death by her parents; husband, Edward ; a son, Clark and a daughter, Scarlet (John) Evans; a granddaughter, Jolene; and two brothers, Gene and Marvin.

To order memorial trees or send flowers to the family in memory of Shirley Switzenberg, please visit our flower store.