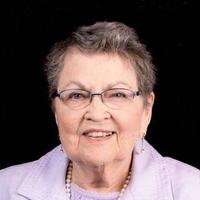 Ruth Arlene Dybvig Bliss of Burnsville, Minnesota, formerly of Sioux Falls, South Dakota, died peacefully on Oct 7. Born November 4, 1925 at her family’s nursery near Colton, South Dakota, Ruth was the 6th of 9 children. Ruth graduated in 1944 from Colton High School and studied at Augustana College until marrying Donald Bliss on August 6, 1945. After living briefly in San Francisco and Milwaukee, Ruth and Don settled in Sioux Falls, where they raised their three children and put down deep roots. After Don’s death, Ruth moved to Burnsville in 2009 to be near her daughter.

Ruth loved to gather friends and family together to “visit,” where many stories and jokes would be shared, always amongst much laughter. Time spent visiting with Ruth also included a good hot cup of coffee – of which her appreciation of at all hours of the day and night is legendary – and a fresh homemade baked good. An excellent baker, Ruth grew up baking pies daily on the farm for her large family. She continued throughout her life to make delicious breads, cookies, caramel rolls, and candies which those around her greatly enjoyed. But her most - requested and well-known recipe was for her famous Norwegian meatballs with gravy that she would lovingly make (and in exceptionally large quantities) for the holidays.

Ruth was a calm, cheerful spirit, which shone out to all she met. Quick to laugh, Ruth recounted that a neighbor would keep her door open at suppertime just to hear their joyful family laughter while they ate. Ruth also had a lovely singing voice; she sang in church choirs and she could be heard singing when she worked around the house. Ruth was also generous and willing to share what she had and help others. This could be seen in thousands of her small everyday acts of kindness, from bringing a slice of pie to a housebound neighbor or using her exceptional skills as a seamstress to alter a neighbor’s clothes.

Ruth’s favorite pastime was playing cards with friends and family. In particular she loved to play duplicate bridge with her husband – and favorite partner – Don. They were a formidable team and enjoyed rehashing specific hands and the bids made for days after the game was over. Ruth continued to play bridge – and to win – late into life, which she modestly attributed to luck or having “good cards.” A patient teacher, she enjoyed teaching her grandchildren when they were young to play card games and she later taught other residents at the senior living home to play bridge.
The family thanks the staffs of Emerald Crest, Burnsville and Grace Hospice for their loving and devoted care of Ruth, for which they will be forever grateful.

Services will be held at River Hills United Methodist Church, Burnsville, Minnesota on Sunday, Oct 13 at 2 pm with a graveside service at Hills of Rest Cemetery, Sioux Falls, South Dakota on Monday Oct 14 at 3pm. Memorials in her name can be sent to McCrossan Boys Ranch, USO or a charity of donor’s choice.

To order memorial trees or send flowers to the family in memory of Ruth Bliss, please visit our flower store.