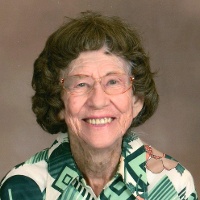 Ruby Erna Thom was born on September 11, 1925 in Edgeley, ND to Herman and Malvena Thom. She grew up and attended school at Edgeley.

On February 14, 1950 on Valentines Day, she was united in marriage to Erwin Doss of Edgeley. Their home was a farm near Breckenridge, MN. In 1960, they sold the farm and moved to Audubon, MN where they continued farming until 1970. The family then moved to Sioux Falls, SD where Erwin worked in the maintenance department of Sioux Valley Hospital, now Sanford Health, and Ruby was a childcare provider.

Ruby always enjoyed working in her garden and attending her variety of flowers. She had a green thumb when it came to plants. Ruby also enjoyed acrylic picture painting during the winter months.

The most important parts of her life were her family and her Lord and time spent with them. Ruby was a life-long member of the Seventh Day Adventist Church.

She was preceded in death by her  husband, Erwin in 2000; parents; and five sisters.

To order memorial trees or send flowers to the family in memory of Ruby Doss, please visit our flower store.