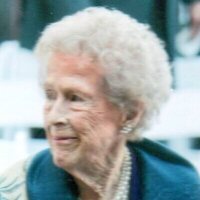 On January 12, Rosemary Brooks left us to return to her savior, husband, family, and many friends that preceded her during her long 97-year life.

Rosemary and her twin sister, Helene, were born to Kathryn (Dowling)  and William Mooney in Philadelphia, PA, on October 27, 1924. There, on the shores of the Delaware River, she grew up swimming, boating, and excelling in basketball at West Catholic High School. As with many of the greatest generation, after graduation, she worked for the Civil Service with the U.S. Army Ordinance during WW II. She met the love of her life and future husband, Captain William (Bill) Brooks, during his visit to Philadelphia with her brother Lou. On July 6, 1946, they married and moved to Sioux Falls. They had one daughter and six sons. Rosemary was a tough but wonderful mother who maintained her humor and patience throughout their childhood.

She led Cub Scout and Girl Scout troops and never missed an event when a child participated.

She and Bill established Brooks Construction, building homes and businesses in Sioux Falls, eventually specializing in concrete products. After their youngest child entered elementary school, she worked for the Catholic Diocese of Sioux Falls as the O’Gorman Minor Seminary administrative assistant, supporting priests and students.

She was an active member of Christ the King Church and enjoyed singing in the choir. Her hobbies included bridge, golf, gardening, reading, and shooting hoops with her children. She appreciated her PEO sisters and their goal of helping women further their education.

She and Bill retired to Lake Placid, FL. They lived in a house on a lake near a golf course for 20 years—a sweet retirement immersed in natural beauty and doing the things they loved with their best friends. In their early 90s, they returned to Sioux Falls to be near family.

A beloved wife, mother, grandmother, and great-grandmother, Rosemary possessed an unwavering moral strength, innate wisdom, and a natural elegance that all will remember.

She is preceded in death by her husband of 68 years, Bill Brooks, her sister Helene, her brother Lou, her parents, and her dog Heidi.

Due to Covid, the family will have a private mass at a later date. The family suggests donations to LifeScape of Sioux Falls or your favorite charity in lieu of flowers.

To order memorial trees or send flowers to the family in memory of Rosemary Brooks, please visit our flower store.