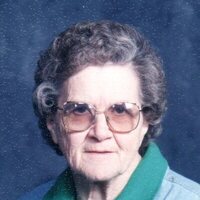 Rose was born on Nov. 24, 1927 in Mitchell, South Dakota, the daughter of Michael and Celcia (Mooney) Mullin. She grew up in Salem where she graduated from St. Mary High School.

Rose married Kenneth Barber on June 12, 1948 in Luverne, Minnesota. They lived in Sioux Falls where they raised seven children. Rose worked at JW Window Components and later as a hostess at Marlin’s Restaurant.

She was a member at Cathedral of St. Joseph for a number of years before joining St. Therese Catholic Church. Rose was a life-member of the VFW and American Legion Auxiliaries. She enjoyed enjoyed needlework, quilting, playing Bingo and bowling.

Visitation will be 5-7 pm Thursday at Chapel Hill Funeral Home. Mass of Christian Burial will be 9:30 am Friday at St. Therese Catholic Church.

To order memorial trees or send flowers to the family in memory of Rose Barber, please visit our flower store.