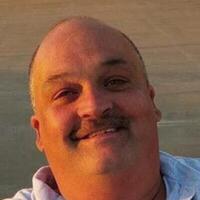 Richard "Rick" Campbell, 54, passed away in the care of loved ones on February 14th, 2022 at 2:00PM at Mercy One Medical Center. Rick was born on September 4th, 1967 in St. Louis, MO to parents Cheryl Campbell and James Campbell Sr. Rick was a Sioux City, IA native, growing up there and attending West High School before residing in Alcester, SD. Rick was employed in various construction companies throughout the years, but most recently worked for Van Zees Enterprises as a ready-mix driver and Knife River as a gravel hauler.

When he wasn't fishing or watching Godzilla movies, Rick was with his family. Family meant the most to him, whether it was sitting around a meal or just spending quality time. One of his favorite ways to spend his time was picking on his nieces and nephews, earning the nickname of "Picky Ricky". He wasn't picky about food, loving a good meal and the memories they form, but he'd make sure you knew how much he hated goulash (and that it is definitely not like spaghetti). Rick spent his life working hard and loving fiercely, and he has left behind a legacy of laughter to those who knew him.

A celebration of life will be held on Sunday, February 20th at 2:00 PM in the home of Brett VanNoort at 200 Main Street, Akron IA. Please come share your memories and stories of Rick. The one thing he wanted was to be with family and friends, and the best way we can honor him is getting together to share in his memory; anyone who knew him knows he wasn't a quiet man, so please come ready to talk and laugh.

In lieu of flowers, please consider a memorial donation to help the family with funeral expenses. Checks can be made to Michael or Sara Snedeker.

To order memorial trees or send flowers to the family in memory of Rick Campbell, please visit our flower store.