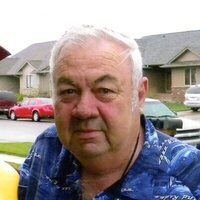 Richard Harlan Brinkman, son of Tunes (“Tony”) A. Brinkman and Margie R. Brinkman, was born May 2nd, 1947 in Sioux Falls, SD. He grew up in Sioux Falls and attended Washington High School. He left Sioux Falls to work as a crane operator for Dave Gustafson construction. He built many bridges across South Dakota that still exist today. He eventually returned to Sioux Falls in 1984 to settle down with his family and began working as a Service Manager for Splash City, where he retired in 2013.

Richard passed down his love of fishing to his kids, grandkids and great grandkids. It was always a fun adventure trying out a new lake, river or fishing hole to catch the next “big one”. All that shared in his life will have many fond memories of him.
He also loved to cook and use recipes passed down from his mother or try out new recipes. He got a kick out of cooking something that we wouldn’t have tried as kids if he told us what it was before eating it, like beef heart.

Richard married Joann (“Jo”) on May 2nd, 1997. They enjoyed attending the Renaissance Festival and vacationing in the Black Hills where they rented a cabin for many years. Rich and Jo enjoyed having lunch at the Alpine and the Eastway Lounge where they developed many friendships. After Jo passed in March 2021, he continued having those lunches and looked forward to them.

His mother was very near and dear to his heart. The last birthday card she gave him was a recorded message. He cherished that card for many years and opened it on his birthday to play the message for the last 21 years.

To honor our father’s wishes a private memorial service will be scheduled in late spring. Thank you to all of our friends and family for the love, support and kinds words. We take comfort in knowing he will be joining our grandmother and his wife, Jo, in Heaven and we will have angels watching over us.

To order memorial trees or send flowers to the family in memory of Richard Harlan Brinkman, please visit our flower store.