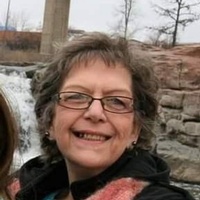 Patty worked as a dietary aid for many years. She was employed at Solomon Valley Manor in Stockton, KS, Wheatland Nursing Center in Russell, KS and Good Samaritan in Hayes, KS. She moved to Sioux Falls in 2011 and worked at Wells Fargo and at Rosa Parks Elementary School.
Patricia passed away on June 8, 2018 at Sanford USD Medical Center in Sioux Falls at the age of 56.

Patricia’s family was her life and she loved being a mother. She was a devout Christian and enjoyed the BSF Bible study and fellowship.

Patty is survived by two children, Susan Palmer and Keith Palmer, both of Sioux Falls; two grandchildren, Kaylee and Preston Palmer; two siblings, Chris Andersen and Penny Paclik; and step-father, Gary Dix. She is preceded in death by her parents and a sister, Pamela.

Interment of cremated remains will take place at Woodston Cemetery in Kansas.
To order memorial trees or send flowers to the family in memory of Patricia Lynn Palmer, please visit our flower store.