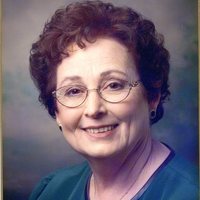 Patricia Lou Scott on March 17th, 1931 on the family farm south of Artesian, S.D., to parents,  Alden and Alene (Schoemaker) Scott. The family moved to Oregon for several years where bother, Alden (Bigge) was born. Her younger sister, Barbara, was born on March 19, 1948, and though 17 years apart,  Pat and Barb where great friends and traveled a lot together.

Pat graduated from Artesian High in 1949. Patricia enjoyed singing in high school and church choirs. She then attended business school in Huron, gaining skills she would use to run a business later in life.

Pat married Cecil Eugene Clarke on March 20, 1951. Both being from farm families, they cherished their roots and often visited to help on the farm and for pheasant hunting.  The couple ran a grocery store in Artesian for 9 years before moving to Sioux Falls in 1961. Cecil found work at John Morrell where he retired after 26 years.

Pat was a true artist enjoying floral arranging, home decorating, painting in watercolor and oils, stain glass and ceramics to name a few. Her love of ceramics led to starting her own business, West Sioux Ceramics, in 1969 with Cecil, son, Tom, and his wife Wanda. Pat taught classes, ran the firing and worked the sales desk for 27 years.  Airbrushing was one of her favorite techniques. Many of her family and friends are so lucky to own a treasured piece of Pat’s artwork.

Pat and Cecil loved traveling and camping. They had a goal to visit all 50 states over their more than 50 years of marriage which was highlighted by their retirement trip and cruise to Alaska.  Pat and Cec   loved to go camping in the Black Hills camping with Tom and his family. They also enjoyed camping on the west coast of Washington with their son,  Mark and his family, son, Loren and daughter, Cindy.  Pat was fortunate to travel out of the country. Cecil didn’t care to go overseas, but he encouraged Pat  to go. She often traveled with her  daughter, Cindy, sister, Barb or niece, Brittany. Her travels included Ireland, England, Wales, Micronesia, Greece, Italy, France, and Africa.

Preceding Pat in death are her beloved husband Ceci;, brother, Bigge; and parents, Alden and Alene.

To order memorial trees or send flowers to the family in memory of Patricia Clarke, please visit our flower store.