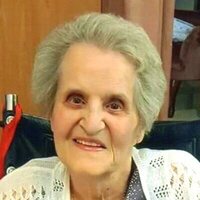 Lillian Orla Lowe was born October 20th, 1932 in Beaver Creek, Minnesota to Olga and Lee Lowe.  Her mother, unfortunately, passed away when she was 7 yrs old.

Orla married Matthew Flanigan in 1956. Together, they had three children; two sons Allan and Edwin, and a daughter, Darla, who passed away at 9 months old.  She then married Clarence Peterson a had a daughter, Cheryl, from this union.

Orla worked as a telephone switchboard operator in her early years. She also worked as a cook for Volunteers of America, a housekeeper at Avera Mckennan Hospital, and a hostess & waitress Fry-n-Pan before her retirement.

After health issues affected her, she became a resident at Covington Heights in Sioux Falls then, Winner Regional Health Care of Winner, South Dakota, and finally, the Good Samaritan Center in Sioux Falls.

To order memorial trees or send flowers to the family in memory of Orla Flanigan, please visit our flower store.