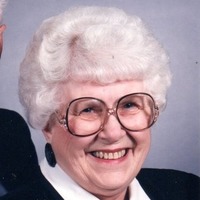 Norma was born on April 10, 1923 at Garretson, South Dakota, the daughter of Norman and Josephine Engebretson. She grew up at Garretson where she graduated from high school in 1940. Norma then attended business school in Minneapolis.

Norma married Howard Joyce on August 29, 1942 at Colorado Springs, Co., while he was serving in the Army Air Corp.  When Howard was discharged from active duty, they returned to Sioux Falls where they raised their children, Patricia, Barbara and Mark.

Norma worked as a bank teller until she retired. During retirement, she and Howard spent time in their homes in Tucson, Arizona, and Bella Vista, Arkansas. She enjoyed traveling and taking family trips to Hawaii and Alaska.

She is survived by her daughter, Patricia Zahn and her husband, Clark, from New Castle, WA; son-in-law, Gary Hermanson of Garretson; granddaughter, Nicole Van Beek of Doon, IA; grandsons, David and Andrew Hermanson of Garretson and John and Theron Zahn of Seattle; and 9 great grandchildren. Norma is preceded in death by her parents; husband, Howard; a son, Mark; a daughter, Barbara Hermanson; and a granddaughter, Elizabeth.

To order memorial trees or send flowers to the family in memory of Norma Joyce, please visit our flower store.