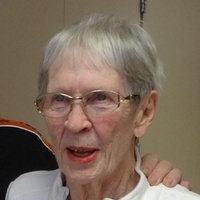 Nola was born on Nov. 21, 1934 at Rutland, Sd., the daughter of Henry and Lenora (Crow) Nelson. Her family moved to Sioux Falls in 1944 where she attended Lincoln Elementary School and Washington High School.

Nola married Roger Anderson on December 27, 1952 in Luverne, Mn. They lived in Sioux Falls and raised two sons, Rodney and Randy. When her children began attending school, Nola started working at the Hollywood Theater. She then worked for many years as a cook with the Sioux Falls School District until she retired.

She is survived by her sons, Rod and Randy (Lynnette), Sioux Falls; three grandsons, Jason (Valorie) of Omaha, Scott (Cathy) of Sioux Falls and Eric (fiancé Jessica) of Sioux Falls; seven great grandchildren, Zadia (Jason) Vacanti, Juliana, Tristan, Joslyn, Brayden, Kinsley and Addisyn; and one great-great granddaughter, Gladys. She is preceded in death by her parents, siblings and husband.

To order memorial trees or send flowers to the family in memory of Nola Anderson, please visit our flower store.