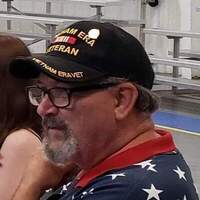 Nicky (Nick) LeRoy Eastman, Centerville, SD passed away December 4, 2021 at Sioux Falls VA Hospital.  He was born July 13, 1953 in Sioux Falls, SD to LeRoy and Leona (Hovland) Eastman.  He attended Beresford High School and received his GED through the Army.  He enlisted when he was 18 and was stationed in Berlin, Germany and Hawaii during his 7 years.

He is survived by a son, Nathan and a daughter, Nileea, two sisters, Karen McDowell, Centerville, SD and Charlynne Smith, North Charleston, SC, three brothers, all of Sioux Falls, SD, Charles (Sharon), Oliver and Dale.  He also leaves behind his special pet cat, Coco, several nieces and nephews and several good friends.  He is preceded in death by his parents, a sister in law Susan, both sets of grandparents.

A grave side service will be Friday, December 10 at 3 pm at the South Dakota State Veterans Cemetery.

To order memorial trees or send flowers to the family in memory of Nicky Eastman, please visit our flower store.