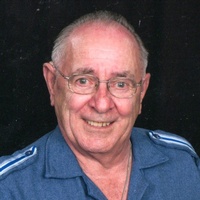 Montie was born on June 26, 1932 in Sioux Falls, South Dakota, the son of Roy and Mary (Curr) Stearns. He grew up in Sioux Falls and attended Washington High School. After he left school, Montie began working at Metz Bakery.

He served with the Army National Guard for a few years and later enlisted in the US Air Force on August 1, 1950 and was discharged on September 15, 1953. Following his discharge, Montie returned to Sioux Falls and his job at Metz Bakery. He married Betty Bell in March of 1952. Montie married Evelyn Burris on June 8, 1964. In 1991, Montie retired from Metz Bakery after 42 years, where he had performed nearly every job available at the bakery.

Montie enjoyed woodworking and gave his family and friends many of his completed projects. He liked bicycling, dancing and walking.

To order memorial trees or send flowers to the family in memory of Montie Stearns, please visit our flower store.