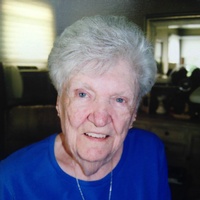 Maxine was born February 22, 1929 in Nevada, Missouri to Dick and Ruby Burris. After high school, Maxine moved to Oregon where she met the love of her life, Marion “Smitty” Smith. They were married in Salem, Oregon on August 19, 1949. They had two children, Sharon and Richard. In 1955, they moved to Sioux Falls to be closer to family.

Maxine was a jovial person who loved people. She had a passion for cooking, baking and entertaining friends. Above all, she loved spending time with her children and grandchildren. For years, Maxine enjoyed weekends at Lake Madison with family and friends.

She had a gift for singing and performed with Smitty’s band all through their married life. She also worked at Howard Johnsons and Pizza Inn.

She is preceded in death by her parents; husband, Smitty in 2009; a brother and a half sister, Joyce Suggs.

The family wishes to thank everyone that stopped by Maxine’s home to visit and share in the laughter and those who cared for her during her last days.

To order memorial trees or send flowers to the family in memory of Maxine Smith, please visit our flower store.