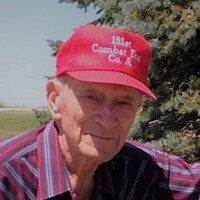 Morris was drafted into the Army on May 7, 1952 and served in the Korean War with the 151st Combat Engineers from December 1952 to March 30, 1954 and was honorably discharged. He was stationed in North Korea for nine months and was awarded the Korean Service Medal with 2 Bronze Service Stars, National Defense Service Medal, Good Conduct Medal, United Nations Service Medal and 50th Anniversary Korean War Service Medal.

He married Janice Opp on September 18, 1955 at Gluckstahl Reformed Church in Mc Pherson County.  He remained on his family cattle ranch and birthplace near Leola for 48 years.  He served on the Board of St. Paul’s Lutheran Church in Leola, Lifetime Member of the American Legion and D.A.V.   On September 19, 1981 they moved to Sioux Falls where he was self-employed as a handyman, did woodworking, lawn mowing, and snow blowing.  He also worked for Campbell Supply and Mills Distributing.

To order memorial trees or send flowers to the family in memory of Maurice "Morris" Jundt, please visit our flower store.