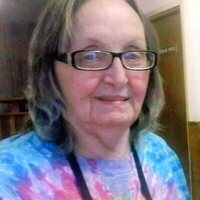 Mary was born on October 17, 1943 in Sioux Falls, the daughter of Carl and Dorothy (Lindner) Fisher. She grew up and attended school in Sioux Falls. She married Charles Kopecky and they had a son, Charles. Mary and Charles later divorced. Mary met Larry Bjerk in 1966 and they had been partners for 35 years when Larry passed away in 2000.

Mary worked at a nursing and hotels performing housekeeping duties for many years. In her free time, she enjoyed crocheting blankets, vegetable gardening and reading romance novels. Mary and Larry loved to go fishing and attended many Polka Nights at the Arkota Dance Hall. She enjoyed shopping for Avon products and was always exited for her appointments at the beauty shop. Mary liked going out to eat and when she couldn't get out,  she ordered take-out food and even had it delivered to the nursing home while she live there. She cherished spending time with her great grandson, Gage, who could always bring a smile to her face and lift her spirits.

She was preceded in death by her parents; a brother, Bob; a grandson, Dustin; and her life partner, Larry Bjerk.

To order memorial trees or send flowers to the family in memory of Mary Kopecky, please visit our flower store.