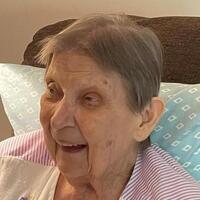 Lorayne was born on January 21, 1930 in Sioux Falls to George and Sena (Hanson) Embertson. She grew up at Larchwood, Iowa where she graduated from high school.

Lorayne married Wayne "Bud" Woolheater in 1950 and they lived in Sioux Falls. Lorayne was a stay at home mom while her children were young. Bud passed away in 1961. Lorayne went to work to support her family and was a bartender at the Red Lantern and Top Hat for several years. She later took a job at Westward Ho were she worked in the snack shack for nearly 20 years, retiring when she was in her 80's.

She enjoyed bowling and reading

She is preceded in death by her parents, husband, Bud in 1961, and four siblings, Georgina, Betty, Donna and George.

To order memorial trees or send flowers to the family in memory of Lorayne Woolheater, please visit our flower store.