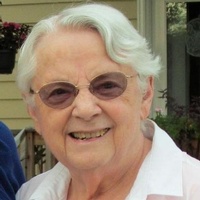 Lenora Ardys Anderson was born August 11, 1926 at Madison, SD to Carlyle and Inza (Thomas) Anderson. She was raised on the family farm near Oldham. She graduated from high school and attended teachers college.

Lenora enjoyed camping with Harvey for several years. They were charter members of Grace Lutheran Church and Lenora sang in the choir for many years. She was an avid reader and enjoyed watching the NCIS television show and Lawrence Welk.

Lenora was 92 years old when passed away October 8, 2018 at the Good Samaritan Village, Sioux Falls.

Grateful for sharing her life are her sons, Larry Anderson and his wife, Janet, Sioux Falls, Wayne Anderson, Scottsdale, AZ; a grandson, Darin Anderson; a sister, Laurel Jensen, Sauk Rapids, MN and nieces and nephews. She was preceded in death by her husband of 63 years, Harvey; parents; an brother and a sister.

Memorials may be directed to Grace Lutheran Church.

To order memorial trees or send flowers to the family in memory of Lenora Anderson, please visit our flower store.