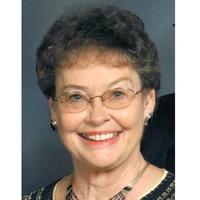 LaVonne was born April 10, 1938 in a farm house in Lyon County north of Russell, Minnesota. She was the daughter of Orvin and Hilda Broughton of rural Russell. She attended grade school in Russell and graduated salutatorian from Lynd High School, Lynd, Mn.

LaVonne attended Augustana College for several years. While in college, she had several jobs in Sioux Falls. After leaving college, LaVonne was employed at Bell Telephone office in Sioux Falls as an operator until she was married. LaVonne and Merlyn were married on June 3, 1960 at Grace Lutheran Church in Russell. After they were married, she and Merlyn moved to Los Angeles so Merlyn could attend mortuary college. While in California, LaVonne worked for Pacific Bell Telephone as a trouble-shooter operator and at Schanel Mortuary as a part-time secretary. Upon Merlyn's graduation, they moved to Rapid City, SD where LaVonne worked at Western Bell Telephone in the drafting and planning department.

Merlyn and LaVonne moved to Adrian in January of 1964 and where she was employed at Bittner Oil Company until she became the Superintendent Secretary at the Adrian Public School. LaVonne worked at the school for 37 years, retiring in 2001.

After her retirement, LaVonne volunteered at the Adrian Nursing Home and Zion Lutheran Church. She held many positions in the Women’s Group at the church. LaVonne planned the church Lutefisk Dinner for many years which was a prime money maker for the church. She was a member of the Adrian Lions and was presented the Melvin Jones Award for outstanding service to the club and the community.

LaVonne was an expert at making lefse and it was a passion that often kept her up late at night filling orders. Her customers told her it was the best lefse they every tasted. LaVonne sold them by the dozens during the Thanksgiving and Christmas seasons. She delivered lefse orders to the local Norskies and shipped orders to Maine, Florida, Texas, Iowa, the Dakotas and even Hawaii.

She enjoyed playing cards and Bridge and played in several card clubs. LaVonne loved to fish and camp. In 1980, she and Merlyn bought their first camper and traveled throughout the surrounding states. In 1983, they acquired a larger camper and camped locally and at Lake Shetek. In 1990, they bought a home in the Valhalla Mobile Court. They lived there in the summer and improved the property until they sold in in 2012. They also spent some time in Arizona during the winters of 2003, 2004 and 2005.

LaVonne was diagnosed with Alzheimer’s Disease in the Fall of 2006 although she had symptoms for a number of years prior to the diagnosis. She lived at the Meadows in 2013 but was unable to stay there as the disease progressed. LaVonne moved to the Good Samaritan home in Pipestone in January of 2014. She moved to the Good Samaritan Mary Jane Brown Nursing Home at Luverne in October of 2015. LaVonne passed away at the nursing home on December 9, 2021.

LaVonne and Merlyn did not have children, but were foster parents for over 30 years. They had six children that were part of their home as long term placements; Susan and Tanya Thom, Mike and Chad Marsh, and Angie and Sandra Gonsor. Angie came into their home at age 5 and was with them all through high school and two years following high school graduation.

LaVonne is survived by her husband, Merlyn; a daughter, Angie Schieck and her children, Katrina and William; two nieces, Amy Bukkila and Julie Olin.  She was preceded in death by her parents, Orvin and Hulda Broughton; two siblings, Vivian Larsen and Vern Broughton; and nephew, Dallas Larsen.

To order memorial trees or send flowers to the family in memory of LaVonne Inglett, please visit our flower store.