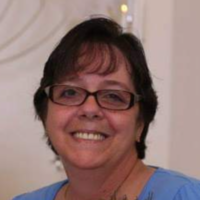 Karen was born on June 13, 1960 at Batavia, New York, the daughter of Willis and Joan (Bardo) Gamber. She grew up in several communities in the United States, moving frequently as her father was in the military and, after his discharge, worked as a heavy crane operator which required moving as well.

Karen married Edward Angerhofer in Milbnk, SD and they had one daughter, Jennifer. They lived on the Davis Monthan Air Force Base in Tucson, AZ. They then settled in Summit, South Dakota and worked as a CNA at a nursing home in Milbank for a few years and the Roberts County Sherrifs Department. She then worked in Watertown at “The Other Place” and the 212 Diner. Karen moved to Sioux Falls in 2002 and then worked at CCL Label for three years.

Karen married Marvin Keimig, Sr., on May 27, 2005. She returned to nursing work at the Good Samaritan Center in Sioux Falls for short time until her cancer treatment prevented her from working.

She enjoyed listening to country music and watching shows on the Hallmark Channel. He greatest joy in life was spending time with her grandchildren.

Karen is survived by her husband, Marvin; her daughter, Jennifer Parisien of Lennox; two step sons, Marvin Keimig, Jr. and Marty Keimig, both of Clear Lake; many grandchildren and great grandchildren; five siblings and their spouses, Tom and Michelle Gamber, Tim and Sandy Gamber, Bill and Linda Gamber, Barbara and Gary Mettler, and Michelle and Bill Leiferman. She is preceded in death by her parents; a step-daughter, Mellissa Davis; and a sister-in-law, Mona.

To order memorial trees or send flowers to the family in memory of Karen Keimig, please visit our flower store.