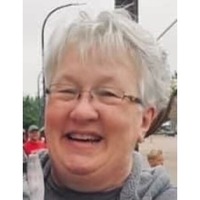 Julie R. Crawford was born on January 5th, 1960, the daughter of Jack and Karen Warborg in Volga, South Dakota. Julie was raised and educated in Estelline, South Dakota, graduating from Estelline High School in 1978. Julie went on to pursue her nursing degree from Lake Area Tech and Graduated with a Degree in nursing.

Julie’s nursing career began in the Brookings Hospital, where she met Kevin Crawford. The two married on August 15, 1986, and moved to Sioux Falls, where they raised their three daughters.

Julie found her “home away from home” at the Avera Hospital in Sioux Falls. For over 32 years, she had an impressive career at Avera. She then moved on to share her knowledge and skills as a traveling nurse working across the United States.

Julie’s first passion in life was her children, grandchildren, and newest great grandbaby. Her second passion in life was sewing and crafting. She was a designer of wonderful creations! From wedding dresses, prom dresses, quilts, table runners, Christmas decorations, and cloth diapers for her grandbabies’ bottoms. Everything Julie touched was precise, beautiful, and made with so much love.

Julie was preceded in death by her father, Jack Warborg.

A celebration of her extraordinary life will be held later date.

To order memorial trees or send flowers to the family in memory of Julie Crawford, please visit our flower store.