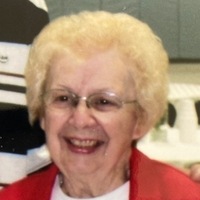 Joyce Darlene was born on May 5, 1932 in Sioux Falls to Carl and Leona (Smith) West. She received her education in Sioux Falls at Washington High School.

In 1951, Joyce was united in marriage with Talmage Questad at San Louis Obispo, California. While they were stationed at Ft. Monmouth, NJ, Karen was born. When Tal was discharged, they moved to Sioux Falls. Joyce, Karen and her granddaughter, Ashley, loved going on weekend trips, rummaging and junkin’. Joyce was close with her family. Joyce and Karen were joined at the hip! Best friends!

In 1985, she started volunteering at Avera McKennan Hospital and put in more than 38,000 hours during 35 years of service.

Grateful for having shared in her life is her daughter, Karen Gjere of Sioux Falls; a granddaughter, Ashley (Chris) Hoffman of San Antonio, TX; great grandson, Lance Mader of Sioux Falls; a brother, Robert (Doris) West of Sioux Falls; and her nieces and nephews. She was preceded in death by her husband Talmage; a grandson, Shane Mader; and her parents, James and Leona Cavanaugh.

To order memorial trees or send flowers to the family in memory of Joyce Questad, please visit our flower store.