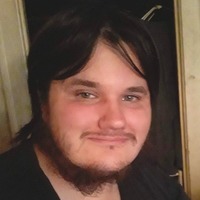 Josh was born on October 12, 1982 to Darryl and Jeanne Verley in Sioux Falls, SD. He spent most of his childhood years in Centerville, SD. After completing his GED, he eventually went on to attend National American University, where he excelled academically.  Josh also earned a spot on the President’s List several times throughout his education.

In 2004, Josh became friends with Nicole “Nikki” Sunderman, they eventually wed on July 23, 2010. He was also the stepfather to Nicole’s three daughters.

Josh spent a lot of his time with his friends and family, listening to music, and keeping current on politics. He was extremely passionate about anything and everything he cared about, and wasn’t afraid to make it known. Josh had an overabundance of love for his wife, his parents, and his bunny, Lucy. He will be deeply missed.

Josh was preceded in death by his paternal and maternal grandparents, as well as several uncles. He is survived by his beloved wife (Nikki) and step-daughters (Kira, Kassidy, and Kiana), his parents (Darryl and Jeanne Verley), his sister (Jolene (Joe) Wieneke), his brother (Micheal Verley), many aunts and uncles, numerous nieces and nephews, and a multitude of friends.

To order memorial trees or send flowers to the family in memory of Josh Verley, please visit our flower store.