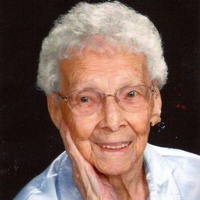 Josephine was born November 17, 1914 near Carthage, South Dakota, the daughter of Clyde and Mattie Sundell. She attended school near and in Carthage. As a teen, Josephine won many 4H awards.  She was brought up in the Lutheran church.

Josephine married Edwin Corley and they raised two children, Richard and Jeannine. They moved from Sioux Falls to Wall Lake, just outside of Sioux Falls, and later to Spicer, Mn., where the bought a business called Spicer Playland. They sold the business and retired at Mesa, Arizona to enjoy the nice weather, friends, golf and craft shows. Josephine used her sewing skills to dress the reproduction antique dolls and Edwin made beautiful turquois and silver jewelry.

Josephine and Edwin loved to dance, and Josephine said “dancing keeps you young”. They were both musical, Josephine played the piano and Edwin played the accordion. They also enjoyed motorcycle riding and attending the Sturgis rally.

Josephine moved back to Sioux Falls to be closer to her family and became a member at First United Methodist Church. At eighty years old, she discovered computers. She took some classes and went to work for Green Thumb. If Josephine hadn’t begun to have eye problems, she would still be working. Josephine passed away on February 16, 2018.

To order memorial trees or send flowers to the family in memory of Josephine Corley, please visit our flower store.