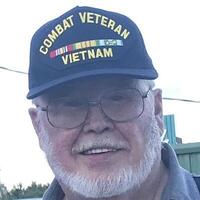 He graduated from Mt. Lake High School in 1957 and from Trinity University in San Antonio, TX in 1961 With a degree in business administration. He married Edna Jean McDonald on August 14, 1960. He served in Germany during the Berlin Crisis from 1961 to 1963. When he returned to the States, he joined the John Deere business with his dad. In 1968 he was called back to active duty and served in Vietnam from November 1968 to August 1969. After his return, he owned a clothing store in Mt. Lake. In

1973 he sold the store and for the next 30 years was a traveling salesman for Lee Jeans, KEY Clothing and Texas Boot.  He moved his family to Sioux Falls, SD in 1976.  He continued to serve in the Army Reserve until 1985 and retired with the rank of Major.  In later years Jerry enjoyed driving for School Bus, Inc and was a favorite of many students.  A lifelong sports fan, he especially liked driving bus for high school games and attending his grandchildren’s sporting events. He never met a stranger and will be remembered for his cheerful and generous nature.

Jerry died on August 3, 2020 at home after very recently being diagnosed with cancer.

In lieu of flowers, please consider a donation to the SD State Veteran's Cemetery through sdcommunityfoundation.org.

To order memorial trees or send flowers to the family in memory of Jerry Engeman, please visit our flower store.