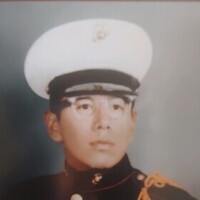 Jerry Yellow Elk died peacefully in his sleep on Saturday, April 17, 2021 at the Dougherty Hospice House on the campus of Avera Prince of Peace.

Jerome Richard “Jerry” Yellow Elk (Hehaka Lute) was born on February 24, 1947 in the Badlands of the Pine Ridge Reservation in  South Dakota to Mollie Red Elk.  He was raised in Little Eagle, South Dakota by his foster mother, Regina One Bull (a direct descendent of Sitting Bull).

Jerry graduated from Fort Yates North Dakota High School in 1967. He served in the United States Marine Corps from 1967 to 1970 and served as a combat infantryman in Viet Nam from 1968-1969.  He participated in the battle of Khe Sanh and also served as a part of the Combined Action Team LucLuong Hon Hop.  For his service he received the National Defense Service Medal . Viet Nam Campaign Medal with device,Viet Nam Service Medal w/2, Combat Action Ribbon, Viet Nam Cross of Gallantry with palm frame, Rifle Marksman Badge, Machine Gun Expert Badge and several Good Conduct medals. He ended his service with the rank of E 4 (Corporal)

Jerome was a Life Member of the Marine Corps Association, Viet Nam Veterans of America, Veterans of Foreign Wars and Disabled American Veterans.

After his honorable discharge from the Marine Corps, he spent a few years working construction. He then enrolled in Kilian Community College to become a paralegal. He received an Associate in Applied Science Degree in Legal Assistant in 1990. He then spent several years working on the Pine Ridge Reservation as a family law paralegal.

Upon his retirement due to disabilities related to his military service, he moved back to Sioux Falls. Jerry was an avid bicyclist and was often seen riding on the Sioux Falls bike path.  He was also noted for feeding the birds and squirrels by his apartment.

Jerry will be buried with military honors in the South Dakota Veterans Cemetery later this summer.

He is survived by two half: brothers  Wendell Clairmont and Leonard Yellow Elk; special friends: Eva Mott, Doug McCuddin, Bill Peterson and many other friends.

Memorials may be sent to the Sioux Falls Parks and Recreation Department to support the Sherman Park Burial Mounds.

Jerome Yellow Elk was a proud warrior and a gentle soul.  May Hehaka Lute rest in peace with his ancestors.

To order memorial trees or send flowers to the family in memory of Jerome Yellow Elk, please visit our flower store.