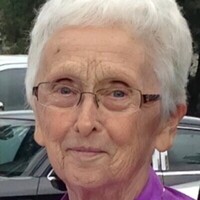 Jean passed away on October 9, 2021 at the Diamond Care Center in Bridgewater, SD.

Jean Ann Rinehart passed away peacefully with her children at her side the evening of October 9, 2021.

She was born March 1, 1931 to Maude (Kessler) and Frank Morrison on a farm north of Bridgewater, one of seven daughters. She grew up in Bridgewater, attended the First Presbyterian Church, and graduated from Bridgewater High School. She worked briefly as a secretary at Hofer Implement before marrying Howard Rinehart in 1949. They lived in Bridgewater and raised their children there as they farmed and Howard ran his trucking business.

Eventually, after Howard passed in 1984, Jean Ann moved to a small acreage east of Bridgewater, where she enjoyed gardening, working in her yard and hosting many family gatherings. She loved to cook and bake, teaching the grandkids how to make their favorite recipes. She enjoyed and appreciated the simple things in life – rides in the country, leaves changing with the seasons, birds and flowers.

She eventually moved to Sioux Falls and lived independently until her final years when she moved back to Bridgewater, residing at the Diamond Care Center.

Jean Ann’s life centered around her family and she attended the many sporting and school events of her 19 grandchildren, 16 great grandchildren and 2 great-great grandchildren. Her greatest joy was holding and rocking one of the grandbabies, working her magic to soothe and quiet them, even in the last weeks prior to her passing.

She will be dearly missed by everyone. Her loving, kind manner will forever remain in our hearts and memories.

Blessed for being in her life were her children George (Sue), Dan (Sandy), Jane (Steve), John (Ronda) and Jim (Kim), grandchildren, great grandchildren, and many dear nieces, nephews, relatives and friends.

Jean Ann was preceded in death by her son Jerry, her husband Howard, her parents Frank and Maude, and her six sisters – Celia Mary, Faye, Betty, June, Hazel and Bernice.

To order memorial trees or send flowers to the family in memory of Jean Rinehart, please visit our flower store.