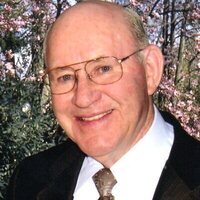 Jim was born on April 28, 1928 at Canton, South Dakota, the son of Thomas and Nellie (Huntwork) Colwill. He grew up on a farm and attended country school. His father passed away and Jim discontinued his schooling to take care of his family and the farm.

He married Shirley Edwards on ____. They raised two children, David and Lori. Jim worked in the construction and excavating industry. He worked with Koenig Brothers Construstion , Kelly Construction and many years with his cousin at Colwill Brothers Construction. They worked on water and sewer line projects and telephone cables. After he retired, he worked at Sunshine Foods for several years performing many duties.

Jim enjoyed hunting, fishing and listening to country music. He was lifetime member of the VFW and a member at the Moose Lodge.

He is survived by his wife, Shirley; children, David of Sioux Falls and Lori (Waren) Meyer of Sioux Falls; two grandchildren, Derrick Meyer and Calie Meyer; and a sister, Myrtle Gudahl of Yankton. Jim is preceded in death by his parents and two brothers, George and Fred.

Interment will take place at the South Dakota Veteran Cemetery as a later date.

To order memorial trees or send flowers to the family in memory of James David Colwill, please visit our flower store.