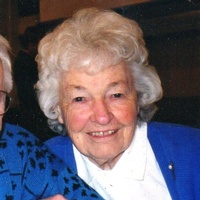 Iola Joyce Nelson was born to Anna and Harley Grotjohn in Canby, Minnesota on August 22, 1925. Iola graduated from Canby High school in 1944 and soon thereafter moved to Sioux Falls where she worked at Morrell’s, and met her husband, Donald A. Nelson. She and Donald loved to dance at the Arkota Ballroom. They continued to regularly dance until they were unable to do so.

Donald and Iola were married in Bryant South Dakota on May 9, 1948. They had five children, Marilyn, Janet, Larry, Craig, and Lori.

Iola could sew and mend anything and was often asked by the neighbors to make alterations for their children’s wedding and prom dresses. Most children in the neighborhood loved Iola and many called her grandma.

When Iola’s children were growing she always made sure that there were sweet rolls for the neighborhood children to eat on Saturday morning. Many of the children read the books from her library. Iola raised the children while Donald worked for the railroad and she also worked as a teacher’s aide at Linnwood school.

She liked to read, do puzzles, and participate in church activities. She loved to quilt and did so every Wednesday with many of her church friends. Special to her were her brothers and sisters, Elaine, Betty, Bud, Darrel, Roger, & Shirley.

Iola’s Lutheran faith was her bond to the Lord. She and Donald rarely missed a Sunday church service. She was a member of First Lutheran Church for 71 years, where she spent countless hours working for the annual church bazaar. She was proud of her children, grandchildren, and great grandchildren.

Memorials may be directed to First Lutheran Caring Ministry.

To order memorial trees or send flowers to the family in memory of Iola Nelson, please visit our flower store.