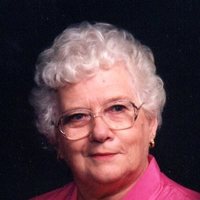 Ilan Marie Kinsley, age 98, died peacefully at home on December 8, 2019, surrounded by loving children and grandchildren.  Ilan's strong Christian faith had prepared her for the end of life, and she returned to God with her customary grace and peace.
Ilan Kinsley was born October 3, 1921 at Kaylor, SD.  She moved with her family from their farm to Sioux Falls when she was ten years old, and was thrilled to discover a public library and swimming pool.  She graduated from Washington Senior High School in Sioux Falls.  She was united in marriage to Robert Eugene Kinsley on May 8, 1942.
Ilan had a special love for babies and young children, and she was able to demonstrate her tender care while working as a nurse's aide in pediatrics for 25 years at McKennan Hospital.  She also volunteered in the nursery at First Baptist Church for many years, and had an active role in taking care of many of her grandchildren.
She had an adventurous spirit, which led her to try white water rafting, helicopter rides, a balloon ride and to travel all over the world.  A few of her favorite memories were trips to Australia, Thailand, and a dogsled ride under the light of a full moon at the north pole.
Ilan also enjoyed sewing, crochet, card games, board games, and any challenging puzzle.  She sought a life of service, and spent many volunteer hours at First Baptist Church and in other service clubs sewing and crocheting special gifts for others.
She was preceded in death by her husband, Robert Kinsley, and a son, Steven Alan Kinsley.  She is survived by her children, Robyn Anderson of Sioux Falls, Marsha Magnone of Colorado Springs, CO, Jill Gabel (Bruce) of Watertown, SD, Gary Kinsley (Diane) of Sioux Falls, Jeanne Brudvig (Mark Beverage) of Sioux Falls and Randy Kinsley (Susan) of Sioux Falls), 15 grandchildren, 14 great grandchildren 5 great great grandchildren, and two sisters Lavern Fisher (Sioux Falls) and Sharon Tulowetzke (Sioux Falls).

Memorials for Ilan Kinsley may be directed to Dow Rummel Village.

To order memorial trees or send flowers to the family in memory of ILAN KINSLEY, please visit our flower store.