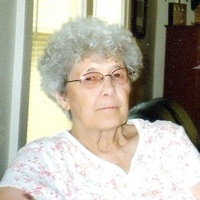 Helen was born in North Dakota to Raymond and Agnes (Norton) Westra. She grew up in Forman, North Dakota and graduated from Forman High School.

Helen married William Slaight in 1949 and they had four children together and were later divorced. In the mid 1950’s, Helen moved to Sioux Falls, attended nursing school, and became a Licensed Practical Nurse. Helen married Edgar Warwick in 1957 and they had two children.
Helen worked at Sioux Valley Hospital (Sanford) for many years. When she retired from nursing, Helen then worked as a receptionist at Sanford Hospital until she retired in 2014.

For many years, Helen enjoyed going to lunch with her co-workers and friends. She liked growing vegetables and flowers in her garden. She also and made sure that the birds and deer were fed. The neighborhood children always new they could stop at Helen’s for a Popsicle.

Helen was 85 years old when she passed away on December 9, 2018 at Ava’s House in Sioux Falls.

To order memorial trees or send flowers to the family in memory of Helen Warwick, please visit our flower store.