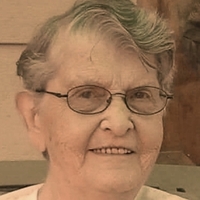 Hazel was born to Gust and Tena (Haugen) Nysveen in the rural Volin, South Dakota. She attended the West Prairie and McFarland schools. Her family moved to a farm in the Centerville area where she graduated from high school.

Hazel worked in Sioux Falls for a time and then moved to Brainerd, Minnesota area where her sister, Louise, lived. She returned to Sioux Falls and was working in a café when she met Cornelius “Red” Landman. They were married in 1947 and had two children, James and Julie.

When the children were school age, Hazel worked at Newberry’s Dime Store for about ten years. She later worked as a waitress at Kirk’s Café and then was employed at Dakota Industries in Tea and Dell Rapids for three years. Hazel then worked at Raven Industries as a fabric cutter for twenty-three years until she retired in 1989.

She is preceded in death by her parents; husband in 1981; and seven siblings.

To order memorial trees or send flowers to the family in memory of Hazel Landman, please visit our flower store.