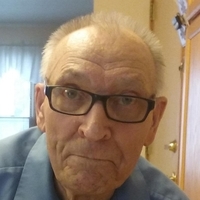 Harold Grieger was born July 29, 1927. His father, Alfred Grieger, and his mother, Ida Birk Grieger, had one other child, Alverna. Harold and Alverna were very close growing up and enjoyed living in the country as well as small towns. After their mother died, Alfred insisted on keeping the children together. His sister, Vera was very important in helping to raise Harold and he grew up enjoying many family gatherings with his cousins. Harold served in the Korean Conflict. He was honorably discharged. He seldom spoke of his experiences overseas, but when he did he tried to inject humor while making sure people understood war was nothing to be glorified. He married Marie Cass in 1961. Harold deeply loved Marie. They were members of churches their entire lives and enjoyed the fellowship they had with fellow believers.

Harold enjoyed fixing anything he could get his hands on. He was especially proud of the restoration of a model T he worked all most of his married life. He enjoyed gardening with Marie. He truly saw himself as the supportive husband and was very proud of Marie’s success in her Mary Kay business.

As his daughter, I cannot begin to tell you how he made me understand and see myself as a gift from God. He went out of his way to carve my name into little pieces of metal or wood. He took me fishing and we laughed as neither one of us knew what we were doing. He listened. He was gentle. He set an example of servanthood by being a silent worker in the Zion Lutheran Sunday school faithfully collecting offerings, recording them, collecting attendance records and doing jobs around the Sunday school.

He also persevered at doing things that were very hard for him. He passed his electrician’s test after struggling with reading the complex texts. He spent hours reading the Bible to complete the Bethel Bible study. I admired how he never seemed to give up.

Harold was practical. His advise rings in my ears every day. If you take something apart, remember where to put it back in. Duct tape fixes everything. Don’t throw away something you might need later.

When I had children he delighted in each and every one of them. He retired soon after Moyra was born and held her for hours at a time so I could do housework and mother the other children. As we became foster parents, he embraced and remembered their likes and dislikes. He rejoiced when we were able to adopt children as He and Marie were able to.

After my Mom died, my Dad lived a little bit quieter. He still enjoyed church and friends there. He decided he needed a cat. Annabelle and Harold were inseparable from the moment they met at the humane society.

I doubt there was a polka he didn’t like.

Above all, Harold loved faithfully. He was grateful to know Jesus as his personal Savior. He loved going to church, listening to services and Christian music. He taught me and my children to always think about what other people might be going through and to kindly go out of your way to maybe reach out or wave.

When I was asked what he wanted for a funeral service, the honest answer was he was too busy living to think about dying.

Our family was truly blessed to be able to be so close to him these last two years. His sudden passing, while peaceful, leaves a hole in the fabric of our family.

He is survived by his sister, Alverna Andersen, Sara, his daughter and Kent, his son-in law.His grandchildren;Amanda(Eric),Moyra(Tanner) Dietrich, Dahir, Tavian, William, Mackenzie, and Brant(Amanda). Four great grandchildren, Aeden, Ainslie,Clayton and Catherine the great. Special in his life were his brother-in-law Ross and his wife Margaret. Ross and Margaret visited often after Marie’s death and their cards and letters brightened his weeks. All of the members of FACS from Faith Lutheran Church who visited him and wrote lovely cards. Don Fick, a friend so dear and his children, were a joy for Harold to know and talk to.

To order memorial trees or send flowers to the family in memory of Harold Grieger, please visit our flower store.