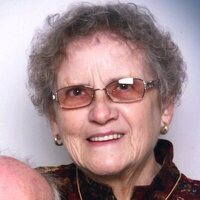 Gwendolyn was born on May 30, 1934 at Salem, South Dakota to Edgar and Arvilla (Steerns) Osterberg. She grew up near Miller, South Dakota where she attended school.

When Gwen was in 11th grade, she began working after school in the office for a local service station. Not long after, Richard began working at the service station, too. Gwen married John Richard Hermann on March 11, 1951 at her parents home in Miller. A few months after they were married, Richard was drafted into the United State Marine Corps and served for two years in California.

The couple continued living at Miller until 1956 when they came to Sioux Falls. Gwen worked at Shrivers Department Store and also took courses to complete her GED. In 1979, she began working at Great American Insurance and in 1984 took a position with Golden Rule Insurance. Gwen worked for the Bradfelt Collection Agency for a few years until she retired.

To order memorial trees or send flowers to the family in memory of Gwen Hermann, please visit our flower store.