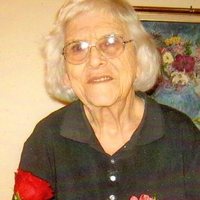 Florence was born January 6, 1923 in Armour, South Dakota, the daughter of Lloyd Isaac Mansfield and Mamie Ruth (Young) Mansfield. She lived in Indiana for a few year and then returned to South Dakota and was raised on a farm near Lennox.

Florence married Ena Javers on July 19, 1942 in Lennox. Shortly after the wedding, Eno left to serve in the US Army during WWII. Florence went to California and worked for a factory in support of the war effort. When Eno was discharged, they lived on an acreage near Lennox for a short time and then moved into Sioux Falls.

Florence worked in the housekeeping department at the South Dakota School for the Deaf and at McKennan Hospital. She took care of her granddaughter, Kim, for many years. In her free time, Florence liked to paint. She also helped her son and daughter-in-law at the campground where she enjoyed visiting with all the campers.

Florence was 97 years old when she passed away at Ava’s House in Sioux Falls.

Grateful for having shared in her life are her children, Richard (Ruth) Javers of Sioux Falls and Joan Schavee of Kansas; eight grandchildren and numerous great grandchildren; and a sister, Cora Schoffelman. She is preceded in death by her parents; husband, Eno in 1990; a daughter, Betty Groth; three grandchildren; and six siblings, Ruth Herr, Mildred Watkins, Vernon Mansfield, Gladys Quigley, Evelyn Hoekman and Ethel Brown.

To order memorial trees or send flowers to the family in memory of Florence Javers, please visit our flower store.