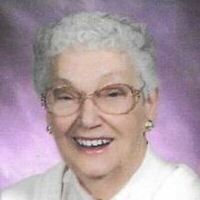 Evelyn was born September 11, 1923 in Newport, Rhode Island to Franklin and Eva Gifford. She was married to Mawrence Dexter Holtberg in Newport and, being a Navy bride, moved to Frazier, Montana where they began their life and became part of a much alrger family. Evelyn enjoyed going to church and loved t play bingo where she was usually luckier than most people.

Evelyn is survived by a son, Tony (Alicia); grandsons, Tomas (Amber) and Anthony (Nicole); great grandchildren, Noah, Oliver, Isaac, Ellery, Benjamin, Astrid and Samuel. She is preceded in death by her parents; a sister, Doris; and her husband, Dexter.

A memorial service will be held at a later date. Her cremated remains will be scattered with her husband's in Frazier, MT at her request.

To order memorial trees or send flowers to the family in memory of Evelyn Holtberg, please visit our flower store.