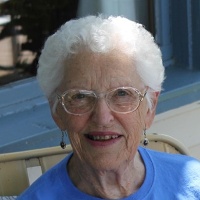 Esther was born on January 14, 1920 at Pipestone, Minnesota the daughter of George and Anna Reitmeier. She grew up on the family farm near Pipestone and attended country school. When she completed school, Esther worked on the farm.

During WWII, Esther went to Portland and worked in a manufacturing plant in support of the war effort. While she was in Portland, she met Buford Clauson while he was in the military. They were married on March 9, 1947 at St. Paul Lutheran Church in Pipestone. They lived in Sioux Falls where they raised three daughters.

When her children were grown, Esther began working at JC Penney as a sales associate. She started out as part-time help during the Christmas Season but ended up working there for nearly 20 years. She retired in 1986.

She enjoyed spending time at her lake cabin on Lake Madison and later, built a home with Sue at Round Lake. Esther has lived in Madison for 17 years. She was 99 years old when she passed away on August 8, 2019 at Ava’s House in Sioux Falls.

Esther loved playing cards and Mexican Train with her family and friends. She was always very active and went to water aerobics for many years. Esther also liked listening to music and made many crochet projects.

She is survived by her daughters, Sue Hanson of Custer, SD, Karen (Montie) Horn of Sioux Falls and Patty (Jim) Wagner of Spearfish; 5 grandchildren, 7 great grandchildren and 2 great-great grandchildren. She is preceded in death by her parents, husband and a brother, Ernest.

To order memorial trees or send flowers to the family in memory of Esther Clauson, please visit our flower store.