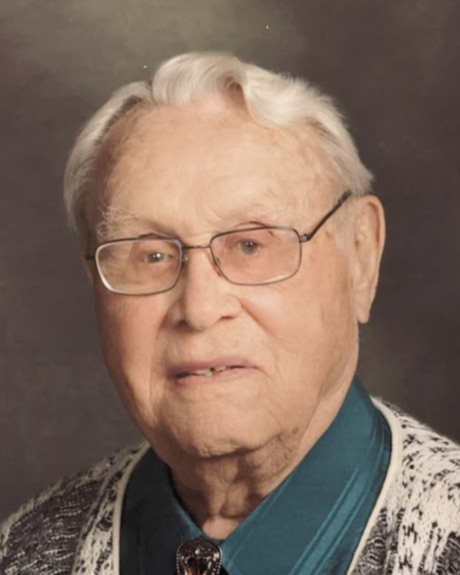 Elwood Lewis Truman, 95, passed away November 23, 2022 at the Dougherty Hospice House in Sioux Falls, SD. “Woody” was born in Hamlin County on June 9, 1927, a few minutes before his twin sister, Ellen Caroline,  to Paul and Francis (Truman) Skelton. Woody was raised by his maternal grandparents, Dr. Lewis and Caroline Truman. Prior to entering the Navy he legally had his name changed from Elwood Conrad Skelton to Elwood Lewis Truman.

Woody attended Bryant High School, graduating in  1945, leaving early his senior year to join the Navy and serve his country during WWII. He later signed up and joined the Reserves after the war. While in the Navy he served on 5 ships. Following his service on the USS LSM17  he received the honor of being named plank owner on the ship for having served aboard for the longest period, and was awarded the U.S. flag that flew the ship. Woody was very proud to serve his country in the Navy during the war. Following his discharge from the service he attended Colorado State in Fort Collins, CO., later transferring and graduating from South Dakota State University in 1952.

In 1947 he married Donna Marie Sour in Long Beach, CA. To this union 4 children were born, Robert, Debra, James and William. Following his graduation from SDSU he taught school in Correctionville and Spirit Lake, IA. In 1957 he accepted a position with the Ralston Purina Company, where he worked until his retirement in 1990.

In 1974 Woody married Marian Cleland. From this marriage Woody gained 5 stepchildren.  Woody and Marian made their home on an acreage by Newton Hills, and enjoyed many years of the beautiful setting that surrounded them.

During his retirement Woody spent his time in his workshop designing and building many beautiful woodworking projects. The most amazing piece of his handiwork is on display at the church that he faithfully attended, until his health would no longer allow. His last big project was a beautiful cross that is hung in the church Fellowship Hall, which he built at age 94.

Woody was also an avid horseman and an active member of the El Riad Shrine Horse Corps. During his younger years he participated in many parades and was a faithful volunteer each year at the Shrine Circus. Woody’s greatest joy in life, however, was always his family and his many friends.

He was preceded in death by his wife, Marian, his son, Jim Truman and Jim’s wife, Deb. His parents, Paul Skelton and Francis Howland, his sister Margot Lubensky, his brother Frank Moffitt and 5 half siblings, Annette Chasteen, Gerald, LeRoy, Maxine and Neal Moffitt.

A Memorial was held on Thursday, December 1, at 10:30 am at the Redeemer Free Lutheran Church in Canton, SD, followed by Military Rites and burial in the Beresford City Cemetery. Blessed be his Memory.

To order memorial trees or send flowers to the family in memory of Elwood Truman, please visit our flower store.

Military Rites will immediately follow the service outside on the church lawn. Burial will follow lunch in the Beresford City Cemetery.