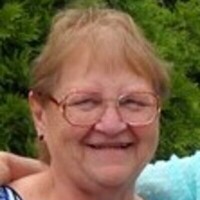 Ellen Rae VanNoort (nee Hennings) was born on December 30, 1948 to LeeRoyal and Madeline Hennings in Soiux Falls, SD.  She grew up in Sioux Falls, graduating from Washington High School.  She had one daughter, AmyJo, with her first husband, Duane Schafer; although through the years many, many kids called her “Mom.”

In 1978 she married Robert D. (Bob) VanNoort.  They were married for 42 years and everyone who knew them could tell that they were a very special couple.  One of the things Bob and Ellen enjoyed together was cruising with their vintage cars.  At car shows, Ellen could be found in her ‘62 Chevy truck and Bob in his ‘49 Buick. They were active members of the Great Plains Street Rodders car club.

They enjoyed having friends and family over to their home.  Ellen liked nothing better than to cook and care for people.  She had a rule to never try out a new recipe on yourself because if it was bad, “you’d have to eat it all alone,” although very rarely did any of the things she cooked come out as anything but delicious. Every Christmas you knew you would find many different kinds of cookies as soon as you walked in the door.

Ellen enjoyed painting ceramics and shared her love of making beautiful things through classes around the region.  She won awards for her craft and many of her friends and family can boast of her artwork in and around their homes. She loved games of all kinds, especially gathering around the dining room table with family for card games of all kinds and Mahjong with friends.

Ellen was a soldier of The Salvation Army church and for many years led their youth programs as the Young People’s Sergeant Major.  She also led the women’s programs as the Women’s Ministry Secretary and enjoyed heading up their annual kettle campaign, helping with the Harvest Festival Auction and helping in any way she could.  She had a helping heart and busy hands.

Ellen is preceded in death by her parents, LeeRoyal and Madeline Hennings.  She is survived by her beloved husband, Bob VanNoort of Sioux Falls, SD; her daughter AmyJo (Paul) Ferguson of O’Fallon, MO; several grandchildren, great-grandchildren; and many friends and family.

To order memorial trees or send flowers to the family in memory of Ellen Van Noort, please visit our flower store.