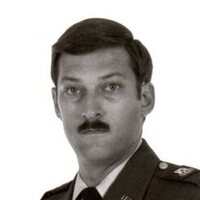 Doug was born on 29 March 1955 in Cleveland, Ohio.  After finishing high school, he went into the US Air Force. He served as an Airman at the Grand Forks Air Base in North Dakota. He got out of the US Air and attended the University of North Dakota in Grand Forks, ND, achieving a BA in Geology.  After graduation, he joined the US Army as a 2nd Lieutenant. While serving, he was involved in an automobile accident that left him a paraplegic and he was medically discharged on disability. All who knew Doug enjoyed his quick wit and pranks.

He was preceded in death by his parents, Stanley J. Cook and Margaret Seredick Cook, and his brother, Colonel Robert Cook. He leaves behind his daughter, Shannon Holstein, a grandson, Robbie Holstein, and nephew Robert Cook, Jr.

To order memorial trees or send flowers to the family in memory of Douglas Cook, please visit our flower store.