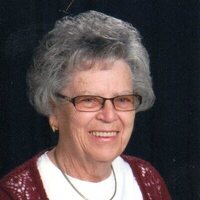 Donna Simons Warner, age 86 of Larchwood, IA passed away on March 22 , 2022 at Fellowship Village Nursing Home in Inwood, IA after a 12 year battle with Alzheimer’s.

The funeral service will be on April 30th at 10:30 at the Church of St. Mary in Larchwood, IA, with a private burial to follow at the Larchwood Cemetery.

Arrangements are under the care of Chapel Hill Funeral Home, Sioux Falls SD. Memorials may be directed to the Alzheimer's Association, 502 1st Street, Sioux City, IA 51105.  Cards may be sent to P O Box 329, Larchwood IA, 51241.

Donna (Donahoe) Simons Warner was born at McKennan Hospital in Sioux Falls, SD on July 1, 1935 to Yvonne (Carmody) and William Donahoe. She graduated in 1953 from Cathedral High School in Sioux Falls and attended one year of nurses training at McKennan School of Nursing.She then worked for two years at the University of Minnesota Hospital in Minneapolis in the office of medical and surgical pioneer C. Walton Lillehei (who invented the heart lung machine for open heart surgery), before returning to Sioux Falls.
On January 19, 1957 she was united in marriage to Robert V. Simons at the Catholic Church of St. Mary in Larchwood. The couple moved to the family farm where they were engaged in farming their entire married life and raised their three boys - Stephen, David and Randall. After Robert's death on November 2, 1988, Donna moved to Larchwood and later married Mervin Warner on July 14, 1995. She remained in Larchwood after Mervin's death on March 21, 2005. In 2012, Alzheimer’s led to her residing at Fellowship Village Nursing Home in Inwood, IA.
Donna was a member of St. Mary Catholic Church in Larchwood. Donna enjoyed working on the farm, being outdoors, music, playing cards, golfing, traveling, road trips, and socializing with friends.  She most cherished spending time with her family, children, grandchildren and great-grandchildren. She will be remembered for her generous and caring heart, positive attitude and warm smile.
Donna is survived by three sons, Stephen Simons of Larchwood, David (Sue) Simons of Sioux Falls and Randall (Laura) Simons of Larchwood; eleven grandchildren, twenty two greatgrandchildren, and her sister, Patricia Donahoe Powers of Jupiter, FL.
Donna was preceded in death by  Robert Simons and Mervin Warner; and her parents William Donahoe and Yvonne Donahoe Due and her stepfather Ova Due.
To order memorial trees or send flowers to the family in memory of Donna Simons Warner, please visit our flower store.