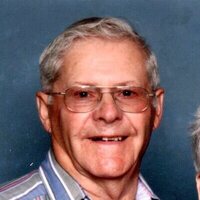 Don was born on December 8, 1937 in Britton, South Dakota, the son of Chris and Clara (Rye) Vermundson. He graduated from high school at Roslyn, South Dakota. After high school, he and his brother, Bernard, operated the family farm near Pierpont.

In 1950, Don was drafted into the US Army during the Korean War and was stationed stateside. He returned to farming with his brother after he was discharged.

Don met Betty at the local roller skating rink. They were married on January 24, 1959 at St. John Lutheran Church in Webster, South Dakota. They settled on the family farm near Pierpont. When Don and Bernard sold the farm a few years later, he and Betty moved to acreage at Hartford. Don began working for Fenn's Ice Cream and worked for them for a couple of years. He then went to work as a star route driver for Dizco in Sioux Falls. In 1992, he and Betty moved to Sioux Falls and chose a house close enough to Dizco that Don could walk to work. He retired from Dizco in 2002.

Don enjoyed fishing, woodworking and having coffee with his friends at the Burger King on W 12th St.

He is survived by his wife, Betty; a daughter, Lisa (Larry) Giannini; 4 grandchildren, Anthony, Christian, Sidney and Josh. He is preceded in death by his parents; 3 children Leslie, Mitchael and Lonnie; and his siblings, Merlin, Bernard, Casper, Robert and Floris.

To order memorial trees or send flowers to the family in memory of Donald Vermundson, please visit our flower store.