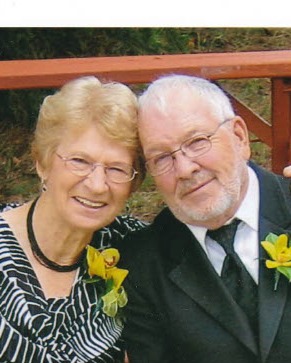 Caroline Aman McDonald, 87, passed away peacefully Thursday, December 17, 2022 at the Vermillion Sanford Care Center. Two days later, on Monday, December 19th, she was joined by her husband of 65 years, Dennis Wayne McDonald, age 89. Denny was also a resident at the Care Center in Vermillion, SD at the time of his passing.

Caroline was born in Freeman, SD on September 9, 1935 to Emil and Pauline (Hieb) Aman. She was raised on a farm, attended country school through her elementary years, and later lived in town with an aunt and uncle to attend high school. Caroline studied nursing at Sacred Heart Nursing School in Yankton, SD. After graduating, she began working at the hospital in Chamberlain, SD where she met Denny.

Dennis was born in Blunt, SD on September 6, 1933 to Orville and Beulah (Nesland) McDonald. While he was a youngster, the family moved to Chamberlain where his father bought a gas station. Denny attended school in Chamberlain where he was involved in sports and enjoyed life on the Missouri River. After high school, he attended college at USD in Vermillion and later served in the army.

One day while walking with a friend, Caroline noticed a handsome young man in a green convertible. She asked him for a ride and they soon became a couple. Shortly after that, Caroline moved to Chicago where she worked in the Polio wards. They communicated through letters while she was away and after she returned to Chamberlain, they got married. They lived in Chamberlain for 6 years and Denny worked with his father and brothers in the oil business. Caroline continued working as a nurse and the couple had 3 children before moving to Miller, SD in 1963. There Denny built a Phillips 66 gas station and managed it for 8 years. Caroline served as the Hand County Health Nurse during that time and their 4th child was born. As they were raising their children, the family enjoyed playing gin rummy, camping, water skiing, and sledding.

In 1972, they returned to Chamberlain and Denny joined his brothers in business again for a time before buying Midway Truck Stop and Brooks Hardware in Kimball. They also owned fuel stops in Plankinton and Vivian, SD. The couple retired from business in 1998 and built a cabin in the Black Hills. During their retirement they wintered in Arizona and traveled around the United States. They treasured the many friendships they made along the way and especially loved 4-wheeling, woodworking, and quilting. Denny belonged to the Masonic Lodge, was a Shriner, and participated in several 4-wheeling groups over the years. Caroline was active in churches wherever they lived and joined card and quilting clubs.

Because the Shriners Organization was such an important part of Dennis’ life, the family requests that donations be made to the Shrine Hospital in lieu of flowers (donate.lovetotherescue.org).

To order memorial trees or send flowers to the family in memory of Dennis & Caroline McDonald, please visit our flower store.