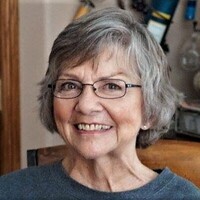 Della Marie Farley, age 77, of Sioux Falls, SD, passed away February 22nd at Sanford Hospital after a brief illness. Graveside services will be held on Saturday, June 12, at 3:00 pm at the Winner City Cemetery, Winner, SD.

Della was born December 29th, 1943, in Winner, SD, to George and Velma (Hiserote) Farley. At the young age of 3 years, she contracted the polio virus and thus spent most of her childhood years in hospitals, including several years in Hot Springs, SD, and then in Minneapolis, MN, where she received care from the Shriners organization at the Shriners Children Hospital. She eventually transferred to Children’s Care Hospital and School and graduated with a high school degree in 1962. After graduation, she was offered a secretarial position at Children’s Care and spent her entire professional career working for the organization.

While polio left Della with significant physical issues, she absolutely did not let it stop her from living a very full life. She enjoyed an active social life with her Bridge Club ladies and played pool for many years at the Moose Lodge in Sioux Falls. Della was proud of the numerous vehicles she owned over the years and the fact that she purchased her own home in 1986 and lived in that same home independently right up until just a few days before the time of her passing. She always looked forward to the food, conversation, and fun of some intense card and board games with family when back in the Winner area visiting. She was also able to have those same experiences with her longtime dear friends Steve and Therressa Hurley who “adopted” Della into their family, and she spent many years attending their family gatherings.

Della is survived by one sister, Rita Dillion of Ainsworth, NE, and 3 sisters-in-law: Joan Farley Manke of Spearfish, SD, Evelyn Farley of Mission, SD, and Elysabeth Farley of Winner, SD. Survivors also include numerous nieces and nephews and a host of friends including dear friends Steve and Therressa Hurley.

She was preceded in death by her parents, George and Velma Farley, one sister Betty Toman, and five brothers: Guy, Robert (who passed away as an infant), Richard, Ralph and Merle.

To order memorial trees or send flowers to the family in memory of Della Farley, please visit our flower store.